Return to The Occident Lodge No. 346

A full history of the lodge in the one century of its existance would be a major undertaking. The lodge, first instituted in 1876, has a background of achievement and growth, and has gathered around it a tradition that comes with age. To tell the story in detail would take a book. We have only a few short paragraphs to record a hundred years of progress, a hundred years in which fine men have practised their craft and contributed to the art.

Occident Lodge was formed at a time when the city of Toronto had twelve lodges, all of them meeting east of Yonge Street. The new lodge was instituted west of that street when a group of masons, headed by W. Bro. James Wilson, a Past Master of St. John s Lodge No. 75 , called for a new lodge to be known as Occident  Lodge. Grand Master, M.W. Bro. J. K. Kerr, announced on March 15th, 1876 that the request had been granted.

On April 5th, 1876, the first regular meeting was held and the lodge instituted, with W. Bro. Wilson placed in the Chair of King Solomon.

For several months, the lodge used temporary quarters, until it moved to Occident Hall, Queen and Bathurst Streets on December 27th, 1876. That remained home for Occident Lodge for thirty–four eventful years until September 1911 when the lodge took up residence in the College Street Temple, where it remained for fifty–three years, experiencing two World Wars and, in this period, produced its most dedicated sons.

Occident moved to the new York Temple on September 16th, 1964 and, finally, to its present address at 888 Yonge Street on the 7th March, 1972. During the hundred years of the existance of Occident Lodge, it has taken its place and fulfilled its purpose in the Order. Many of its brethren have distinguished themselves, not only in public and professional life, but in masonic undertakings. Over the years, Grand Lodge has elected or appointed many of these stalwart masons to serve the Craft with honour, dignity and skill.

Of these notable masons, V.W. Bro. Max Smeall could, in addition to these attributes, be truly epitomised as a skilled craftsman. The beautiful wood carvings in the Senate Chamber and the library in Canada’s Houses of Parliament stands for all time as a memorial to cunning workmanship. This distinguished mason, until his death in 1967, carved individual setting mauls for each of Occident s Worshipful Masters.  V.W. Bro. Max Smeall also formed and became first Master of Patricia Lodge #587.

Such has been the heritage of Occident Lodge to produce men who make their mark on society.

Much more could be written and accolades given to many fine men who have passed through Occident Lodge. Let it suffice by this short summary and example of our past to say that Occident s standards remain
high, and in remembering those one hundred years, we look forward with high expectations to continue our work and our friendship based on those old pioneers who laid the foundation of Occident Lodge.  During that time, 1,757 candidates have been initiated and the present membership stands at 308. 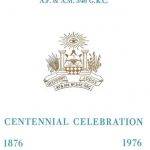 Lives of great men all remind us
We can make our lives sublime,
And, departing, leave behind us
Footprints in the sands of time.