Return to The Occident Lodge No. 346

History of The Occident Lodge

The Occident Lodge  #346 was formed specifically to serve the Masons living in the western part of Toronto. The petition to Grand Lodge requesting dispensation to hold a lodge contained 89 names. The Lodge was warranted at the annual communication in July of 1876, consecrated in August and it moved into Occident Hall in December of the same year. This building, on the South East corner of Queen & Bathurst still exists, but has changed a great deal over its lifetime.

There is a photo in the City of Toronto archives showing the building as it appeared in 1928, at which time it probably looked much the same as when it was built. 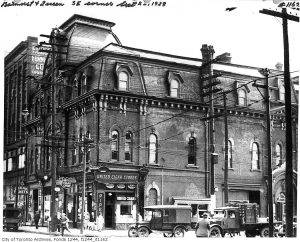 The building facade actually names it the “Occident Buildings” and shows dates of A.D. 1876 and also A.L. 5876. A.L. is “Anno Lucis” or “Year of Light” (often used for Masonic dates) which is intended to count forward from the first Chapter of Genesis. i.e. “… Let there be Light…”.

Entries in the lodge minutes for May 1876 refer to “… the offer by “Messrs West and Watson who propose at once erecting a large building on the south east corner of Queen & Bathurst Streets. The third or top story of which is offered as a Lodge Room…”. The proposal was accepted, and representatives of the lodge were involved in supervising the construction to ensure that the top floor would be suitable for use by a Masonic Lodge.

The architect was E. J. Lennox, also the architect for Old City Hall, Casa Loma, and many other elegant structures in the city. Occident Hall seems to be the first building definitely known to have been designed by him.

I believe Occident Lodge continued to meet at Occident Hall until 1911, when it moved to the new Masonic Hall on College Street. 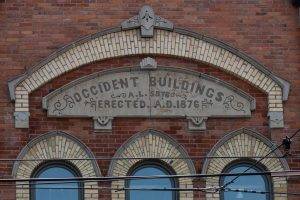 Occident Hall originally housed a pharmacy on the ground floor, and subsequently served for many uses. It has been a hotel, a tavern, a night club, and currently houses a retail store. The top floor was removed in 1948 when it was restructured for use as a hotel. It was painted a dreadful purple when it served as home to the Big Bop night club, but has since been beautifully restored. 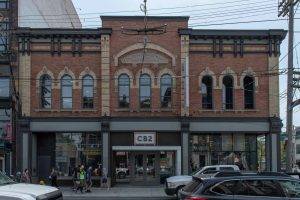 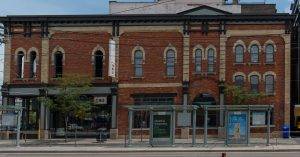 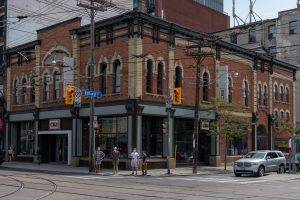