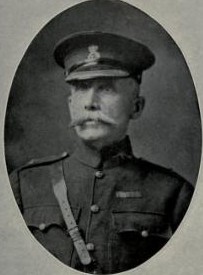 Alfred Curran was born at Kleinburg, Ontario on September 14, 1857, both of his parents having been born in Manchester, England. He spent his working life at the Toronto Post Office, retiring in 1911 as superintendant of the office. He joined the Queens Own Rifles in 1878 as a private and then transferred to the 12th York Rangers where he ended his militia career with the rank of lieutenant-colonel. Curran saw action at the Battles of Fish Creek and Batoche during the Northwest Rebellion of 1885. Curran was a past master of Brunswick L.O.L. No. 404.

Alfred Curran, since 1874 has been in the government post office in Toronto. He is a prominent fraternity man and has held office in several orders. He is a past master of The Occident Lodge, No. 346, A. P. & A. M., of Toronto; and of Farnham Lodge, A.O.U.W. He is likewise greatly interested in the militia, and is captain in the 12th Regiment, York Rangers. Mr. Curran bears a reputation as a fine shot, and in 1899 represented Canada in the contest for the King’s prize for the best shot in the Empire. Capt. Curran saw service in the Riel rebellion in 1885, in which his brother Albert also participated. Capt. Alfred Curran was united in marriage with Miss Louisa Smith, and they have seven children, namely: Ida C., wife of Rev. E. J. McKittrick, and mother of two children, Constance and Lillian; Lillian Louise; Sidney Edward, who married Miss Ina Vance, and has one son, Lloyd; Alfred James, an architect in Toronto; Elma; Cecil; and Lloyd.

Commemorative biographical record of the county of York, Ontario : containing biographical sketches of prominent and representative citizens and many of the early settled families – 1907.